Flame of the Forest

~ No standing in these places, walk on | Kindle Magazine ~

We sit waiting.
Waiting for lunch to be served
It is that odd hour after noon
When rumbling stomachs
And siesta yearnings make
For a heady concoction.

I am strewn sideways
On the white plastic chair
Legs crossed up high
On the concrete seat in the verandah.
While she sits huddled
Like a bundle
In her red plastic throne.

Smiles flash on her chubby face
As thoughts of  heavenly
Fish curry
Light up small happy
Light bulbs strewn on her wrinkled lines.
Like a city balcony on a Diwali night.

As lazy as the sea breeze,
Pinki snoozes beside
The tulsi katte.
Her flurry tail
Twitching in an other-worldly dream
Lucky bitch...
Has her day everyday.

So it is still twenty minutes to lunch
And this clock seems to take too long.
Mild restlessness,
Little streams of thought,
Mix with a yellow haze
Of helpless surrender
To this intruder of the noon
Who creeps in every day,
Just before lunch time
And seeps around me, you , Pinki
Oozing warm lethargy.
A paralysis of events ,
Where nothing can be finished
nor started.

Just that suspended thought,
Saved for after the meal.
Grandmother , young lady
And the bitch ,
Three variables of an equation,
Strewn in the verandah,
Paused in happy hunger,
Waiting till time ticks again.

remembering dear ajji, born in June, the only girl to cycle everyday to school from Tadadi to Torke, who married into Gokarna for love, and had 32 kinds of hibiscus in her garden


stinking Lizaveta
wandering through Amsterdam Centraal
sobbing and searching for her lost God, in blue mascara

stinking Lizaveta
smelling her torn tar-stained clothes
that remind of the night, coal and her dead child’s eyes 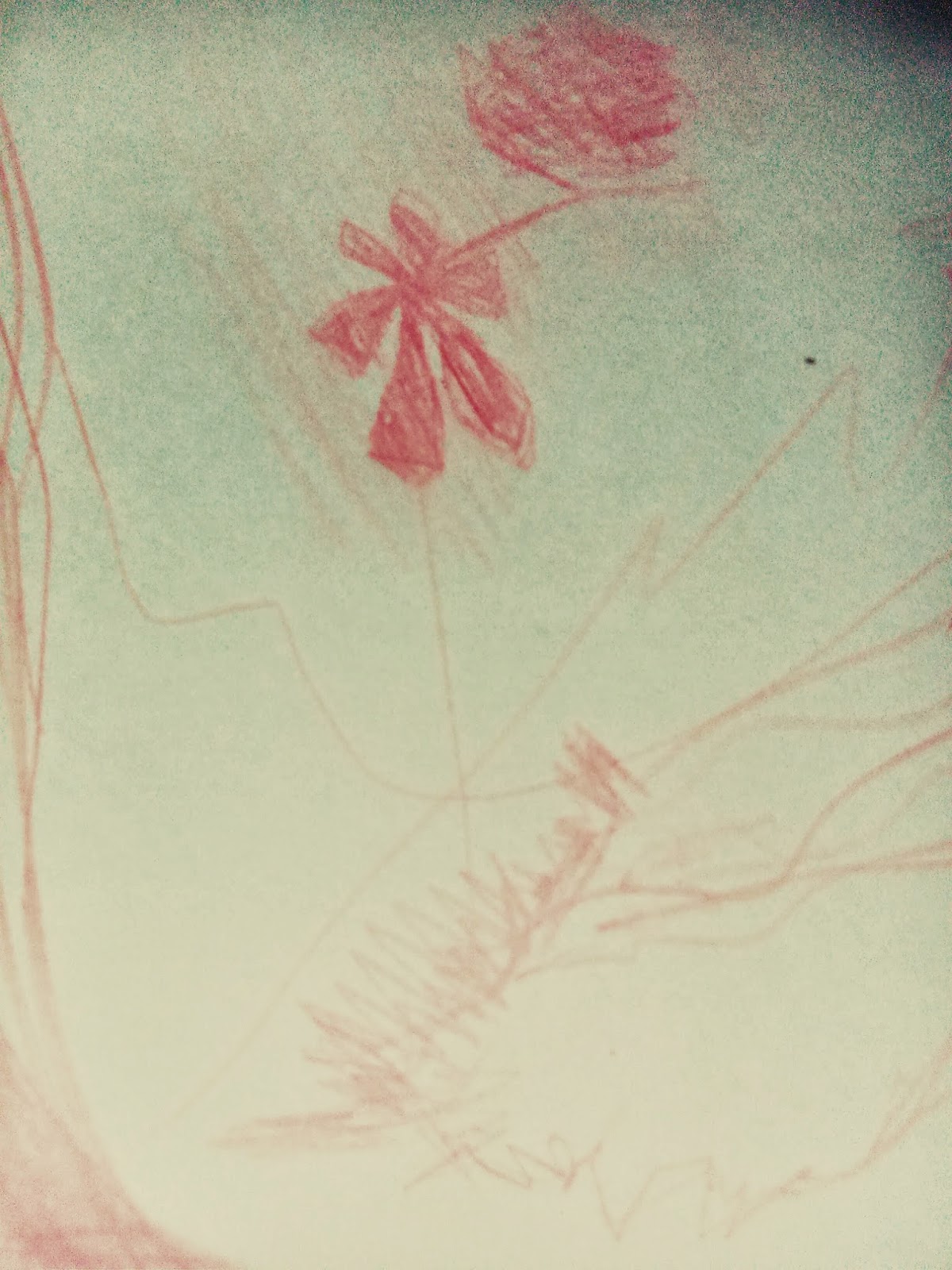 “There was one special circumstance here which deeply shocked Gregory, having finally strengthened an unpleasant and revolting suspicion he had had for some time. Lizaveta Smerdyashchaya was an undersized girl ‘just under five feet’, as many pious old women of our town touchingly described her after her death. She was twenty and her healthy, broad, red face bore an expression of complete idiocy; she had a fixed and unpleasant look in her eyes, though it was meek enough. She walked about barefoot all her life, in winter as well as in summer, wearing only a hempen shift. Her very thick, almost black hair, curling like lamb’s wool, formed a kind of huge cap on her head. It was, besides, always matted with mud, and had leaves, splinters of wood, and shavings clinging to it, for she always slept on the ground and in the dirt. Her gather Ilya was a homeless sickly artisan, who had lost all his money and was perpetually drunk. He had been living for many years as a workman with some well-to-do tradesmen, also artisans of our town. Lizaveta’s mother had long been dead. Ilya , always ill and in a bad temper, used to beat Lizaveta unmercifully whenever she came home.

But she came home very rarely because she used to be fed by everybody in the town as a saintly fool. Ilya’s employers, Ilya himself, and many other compassionate people in the town, especially merchants and merchant’s wives, tried many times to clothe Lizaveta more decently, and towards winter always put a sheepskin and boots on her; but, although she let them put everything on her without protest, she used to so away, preferably to the cathedral porch, and take off everything she had been given – kerchief, skirt, sheepskin, or boots – and leave it and there and walk away barefoot and in her shift as before. It happened on one occasion that our new provincial governor, on his tour of inspection of our town , caught sight of Lizaveta and was deeply hurt in his tenderest feelings. Though he realised that she was a ‘saintly fool’, as indeed he was officially informed, he insisted on pointing out that for a young girl to wander about the street in nothing but her shift was a breach of the proprieties and that it must not happen again. But the governor departed, and Lizaveta was left as she was. At last her father died, and she became even dearer to all the pious people in our town as an orphan. Indeed, everyone seemed to like her and even the boys in the streets did not tease her or molest her, and the boys of our town, especially the schoolboys, are a mischievous lot. She would walk into strange houses and no one drove her out; on the contrary, everyone tried to be nice to her and give her a penny. If she were givne a penny, she would take it and at once drop it into some alms-box in a church or outside the prison. If she were given a roll or a bun in the market, she would go away and give it to the first child she came across, or else stop one of the richest ladies in our town and hand it to her; and the ladies were very pleased to accept it. She herself lived only on black bread and water. If she went into an expensive shop and sat down there, the proprietors took no notice of her, though there were costly goods and money lying about, for they knew that even if they put thousands of roubles before her and forgot all about it, she would not take a penny. [...]”

Posted by Srajana Kaikini at Saturday, March 15, 2014 No comments:

'The page is a touching'

The touch screen - the screen where I come in contact with the outside runs deep. The depth beyond the touch far exceeds an imagination of what an infinity can be. To imagine an infinite world all within your touch. Possibilities that exist only through the mind and implode silently. With each swipe, touch, tap and pinch.

‘The page is a touching, of my hand while it writes and your hands while they hold the book. This touch is infinitely indirect, deferred, but it continues as a slight, resistant, fine texture, the infinitesimal dust of a contact everywhere interrupted and pursued. In the end, here and now, your own gaze touches the same traces of characters as mine and you read me and I write you.

If I write I create sense-effects. I displace myself from bodies. Exscription passes through writing and so we have to write from a place, a body that we neither have nor are.’
- Jean Luc Nancy, Corpus

Dancing is writing, writing in space, making space within the opaque, hollowing it out so the inside and outside are no longer apart. The inside-outing of an intestinal desire. Akka Mahadevi wraps herself in silk rays from the sun, Krishna opens his mouth to show his mother an entire cosmos. The eye is the crack whose infinite darkness saves brightness from staining - a suction pump that deletes and erases all temporary files from Random Access Memories.

A sincere body, acting behaving, dancing and imitating everyday touches sincerely the ground it walks, tumbles and crawls upon. Writing about the dead owl outside our house and its passing makes the owl die two times over. Thriving on the ink and paper or the incandescent glow of the laptop screen and its flickering letters, the white feathers reappear on the grey belly of the owl, electrocuted by the electric pole by the street outside our house.

A body is perhaps made by its documentary. It lives, it dies, it breathes when it has been written in the world of others. A lone human on the planet might as well be a plant or an insect or the wind?

‘But it was in vain that I lingered beside the hawthorns – breathing in their invisible and unchanging odour, trying to fix it in my mind, losing it, recapturing it, absorbing myself in the rhythm which disposed the flowers here and there with a youthful light-heartedness , and at intervals as unexpected as certain intervals in music – they went on offering the same charm in inexhaustible profusion but without letting me delve any more deeply, like those melodies which one can play a hundred times in succession without coming any nearer to their secret.

I turned away from them for a moment so as to be able to return to them afresh.’
- Proust, Swann's Way , In Search of Lost Time

Posted by Srajana Kaikini at Wednesday, February 26, 2014 No comments: